Quest for answers: Where is God's love?

Quest for answers: Where is God's love?

February 11, 2021 - by: Annette Spence - COVID-19
When a friend suggested I write a story on what God’s love feels like to people, especially during the pandemic and a particularly bleak period for most of us, I wasn’t sure I wanted to. I didn’t think I could capture answers that would make a difference.

Yet I thought about my own response to the question, and how many of us Christians are on a quest to share the love of God with others, because he first loved us. It would be helpful to know what others are thinking right now, I realized.

So the question became: “In recent weeks or months, when or where have you experienced God’s love? What did it feel like or look like?” I asked this of people not just in our United Methodist circles in Holston Conference, but also others who may have a different way of thinking on faith.

I contacted classmates who have moved away and whose faith I didn’t know anything about. I contacted co-workers, friends of my children, children of my friends, and others who might trust me enough to answer a personal question. 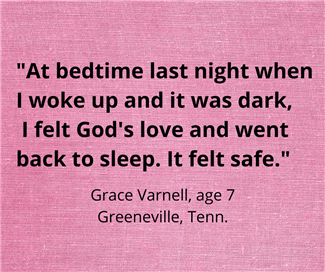 Here are some of their responses.

Brian McGuire is 59 and lives in Atlanta, Georgia. When I asked him about God’s love, he told me about his little dog Jake, who likes to carry a toy in his mouth whenever they walk together in the park. Brian said he’s moved by the joy he sees on people’s faces whenever they see Jake.

“They smile, and watching the smile erupt on their face just fills me with so much joy and happiness,” Brian said. “It really is the Holy Spirit moving amongst us, I believe.” 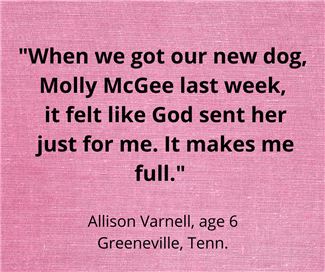 Beth Hager Green, age 59, spoke of daily walks along a reservoir near her home in Pleasanton, California. She said she prays along the way for happiness, peace, safety, health, and freedom for herself, family and friends, for leaders and all people.

Then Beth stands on a hill where she can see several kinds of animals and the water, trees, and sky around her.

“I think on the big world that spins on and pays no mind to people and our mess,” she said. “I think on love and being open and being the better me. I feel calmer and my shoulders relax, and I always smile ... God’s love feels like all of that to me. Hopeful, quiet, and oh, so very big.”

Jordan Frye Shields, 27, is a friend in Knoxville, Tennessee. She also spoke of nature and her walks along the river during the challenging months of the pandemic. Walking has been a meditative practice to help clear her mind as she struggles mentally with COVID-19 and the hurt it has put on her family, she explained.

“Since mid-summer, I’ve regularly seen a great blue heron perched on a log in the river,” Jordan said. “I’ve recently seen the bird quite a bit, and I can’t help but think there is some divine meaning behind me seeing the bird so much in the dead of winter.” 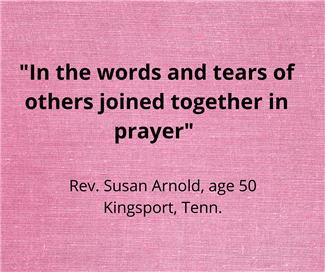 Feeling safe during widespread financial instability caused by the pandemic has felt like the embrace of God’s love to some. Brian McGuire commented that he felt “blessed with secure employment” and the ability that it gives him to help others. “That can’t be attributed to anything but God‘s love, or more theologically accurate, his grace,” he said.

Jasir Bey, age 46, said he was laid off from his job early in the pandemic and at first, he struggled where he lives in Chattanooga, Tennessee. “I started losing things,” he said, explaining how lack of money changed his lifestyle. But then Jasir mentally reframed the situation and begun to look at the pandemic as God’s way of sending everyone home to simplify their lives and “start again from square one.”

“Even though I’m still laid off, for some reason I am doing better than I was with a job,” Jasir said. “No way that could happen without God’s hand.” 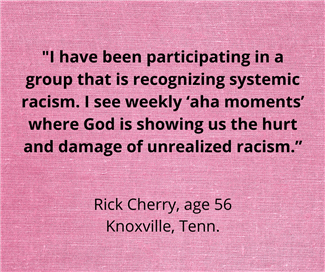 Many of the respondents to the question said they felt the love of the Father through experiences with other people. “In recent times, God has shown their love for me through my friends,” said Matthew Ashline, age 18, of Signal Mountain, Tennessee. “Every hug, every text, and every hello from them raises my spirits and comforts me.”

A 30-year-man who asked for his name not to be used recalled a Fourth of July campfire last summer when he and his musician friends passed around different instruments to play, including a banjo, guitar, bass, mandolin, ukulele and harp.

“Everyone could play everything. There was a moment that I knew, in fact, that everyone was together and had good intentions for each other,” said the young man from Cookeville, Tennessee. “And that is God to me. God is love.”

Dirt Melchizedek, age 34, also lives in Cookeville. His hometown, he noted, has had a recent influx of homeless people. “They’re coming in to town and realizing this is a nice place,” he said. “And people are starting to try to make laws that keep them from soliciting and from being around.”

However, not everybody approves of running out the homeless, and when asked the question about God’s love, Dirt said he’s noticed people, “including my own mom,” packing lunches and taking T-shirts to their new neighbors. 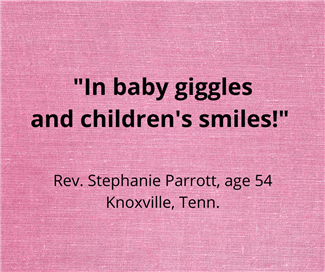 Finally, I reached out to Mary Frances Tucker, whose birthday is on Valentine’s Day. She will be 91 years old.

Mary Frances lost her husband, Guy, in July 2018. Shortly after she moved to a retirement home. “This was a new experience, to say the least, but I knew this was where I needed to be,” she said. “I was enjoying meeting the residents and socializing with them.”

Then “wham,” said Mary Frances, the pandemic arrived. No more socializing. No family or friends, only doctor visits. “I would walk the halls and try to speak and smile at everyone, but then it became the same old, same old, and I found I had moments of loneliness, which I had never experienced.”

Every morning, Mary Frances reads several meditations. On one particularly lonely day, her reading made several references to loneliness. “I felt that God was telling me not to dwell on that, but he was calling me to be in solitude with him,” she said. “I started feeling a peace I had never felt before.” 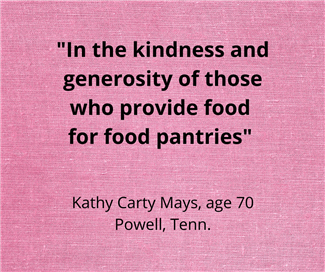 Mary Frances added, “God is always with us, for God is love and can be my comforter."

Brian McGuire literally provided the conclusion to this story.

“I hope the conclusion of your story is that you acquired so many examples that you could not use them all, which is, in and of itself, proof positive that God’s love is abundant and everywhere, even in dark times," he said. "Abundant, palpable and everywhere."