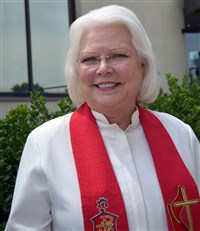 Bishop Mary Virginia Taylor, affectionately called "Dindy" by her close friends and family, has always been nurtured by the church.  Her parents and grandparents were lifelong Methodists.

Born in Washington, D.C., Bishop Taylor moved on her fifth birthday to Atlanta, Georgia.  At nine years of age, she joined the church on profession of faith.  During her years of growing up Decatur First United Methodist Church was her church home.

After graduating from Avondale High School and earning her Bachelor’s Degree from the University of Georgia, Bishop Taylor completed her Master of Divinity degree from Candler School of Theology, Emory University in 1975.

It was at Candler that she met Rusty Taylor.  They were married in June of 1973 and began an adventure of serving as a clergy couple.  They were ordained Deacons in 1974 and Elders in 1976.

The Taylors are parents to two daughters.  Their oldest daughter, Mandy, is married to Kyle Young and she is a pastor in the South Carolina Conference of The United Methodist Church.  Kyle and Mandy are the parents of the Taylor’s four grandchildren, Daisy, Grayson, Campbell and Wesley.  Their youngest daughter, Tiffany, is a 2009 graduate of the University of Tennessee in Chattanooga, Tennessee. Tiffany is an interior designer. She and her husband, Brian Tucker, live in Chattanooga.

As we celebrate the birthday of the church on this Pentecost Sunday 2020, there are many things we wished were different. We wish we could gather for in-person worship with our church community. We wish Covid-19 would go away. And we wish for a world...

Churches remain closed, but the Covid-19 task force is meeting next week to discuss a plan to reopen.