July 23, 2020
COVID-19 Camp Poverty
SNEEDVILLE, Tenn. -- The arrival of two people carrying boxes and waving “hello” is causing a stir in this neighborhood.

“Where are the kids?” Lisa Nichols asks at first.

All of a sudden, the kids are everywhere -- standing on porches, sitting on bikes, staring at the people strolling down their street with boxes.

Some of the children get curious enough to follow after the mask-wearing duo as they deliver “Camp in the Community” kits from door to door.

“Can I have a box?” asks a little boy with missing front teeth and sun-kissed cheeks. (Story continues below.)


Here in Sneedville, Tennessee, a United Methodist camp is arriving on the doorsteps and porches of children spending a hot summer at home in the middle of a pandemic. This camp is not like the camps in the woods where you spend a week away from your parents, nor is it like the day camps that spread out in parks or on church lawns.

This summer, a church camp is being delivered in boxes and videos to low-income neighborhoods throughout East Tennessee, Southwest Virginia, and North Georgia. Last week, 1,400 children were registered to receive boxes full of craft supplies, games, science experiments, Bible stories, and snacks.

By the end of the summer, the number will be even higher, because volunteers making deliveries and word of mouth from guardians and grandparents lead to more registrations and more kids, says the Rev. Tom Robins.

“We started today with 39 boxes for 39 kids,” said Robins, on a 95-degree day in Sneedville. “By the time we got through delivering, we signed up 10 more.”

Robins is a United Methodist pastor who leads two churches 125 miles away in Morgan County, Tennessee. He has a heart for people in poverty and is a fervent believer in Camp in the Community. For the last four years, he’s been trying to offer a church camp experience to children in one of the state’s poorest counties.

According to the Tennessee Commission on Children and Youth, Hancock ranks 95th out of 95 Tennessee counties in median household income, 94th in child poverty.

Lisa Nichols is executive director of Jubilee Project, a United Methodist mission that has served the people of Hancock County for 30 years. Both Nichols and Robins are thrilled that the at-home version of Camp in the Community is reaching a highest-ever number of kids.

In prior summers, Camp in the Community was held at Sneedville’s city park. Organizers struggled to get more than 20 children to participate.

“It just wasn’t working,” Robins said. He informed Nichols and the director of Holston Conference’s Camp in the Community, Whitney Winston, that he wasn’t going back to Sneedville in summer 2020.

In fact, Camp in the Community almost didn’t happen for anybody in summer 2020. When COVID-19 struck the United States in March, the resident bishop and other leaders of Holston Conference took a stand to help keep people in their communities safe. In-person activities for Holston’s 853 churches in East Tennessee, Southwest Virginia, and North Georgia were suspended.

In addition, Holston’s four residential camps – Wesley, Lookout, Dickenson, and Bays Mountain – were closed for the first time in their histories.

Winston, who started Holston’s mobile day camp in 2011 for children who might never have the opportunity to attend an overnight camp, was convinced Camp in the Community also presented huge risks for spreading the virus.

“I felt like the population that we serve is at even higher risk than the other camps,” Winston said. “They often don’t have health care or the ability to pay if they get sick.”

Many of the children participating in Camp in the Community live with their grandparents or great-grandparents, who are at higher risk to COVID-19 due to their age, Winston added.

“I was afraid we would bring the pandemic to them, especially if they are living in an isolated area," she said.

On the other hand, Winston was concerned about the mental health of children who missed out on their last weeks of school and then went into a long summer of pandemic isolation.

First, Winston and her board members came up with a plan to withstand lost income from partner churches that could no longer contribute to the ministry. Then she applied for grants and church donations to support a pandemic-safe camp. A Personal Paycheck Protection loan also ensured that 13 young adult staff, many who are also economically vulnerable, could stay on board.

Then the brainstorming began. Unable to meet in church or office buildings closed to in-person activities, Winston and a core team of seven staff worked at her home in Maryville, Tennessee.


By the end of April, they had created a five-week program for campers to follow in their homes, including 20 activities, five devotionals, and 30 videos per week. Each child also received a food box from Second Harvest Food Bank with coupons for free milk. The programs were provided along with instructions in print and video; on DVD, website and social media; and in English and Spanish.

The new at-home ministry was named “Camp is Where the Heart is” and was approved by Holston’s Bishop Dindy Taylor.

“The way God has used this program to allow our staff to use their gifts and specific skills has been incredible to see,” said Winston, noting that a biochemistry major, Danaya Randolph, helped create the science projects. Kat Brinkley focused on self-care activities, while Carson Ball, a college senior in radio and media, created the video scripts.

An army of volunteers was then enlisted to help prepare (in their own homes) the many step-by-step activities  – such as cutting yarn for string art or assembling ingredients for no-bake cookies.

Another army helped deliver the boxes of glue, foam paper, Jenga blocks, cookie cutters, paint, paintbrushes, seed packets, rubber bands, lemonade mix, beads, modeling clay, Bible lessons and more to the homes of children. They started in June and will wind up at the end of this month.

"We at Jubilee Project keep hearing that our children and youth have nothing to do this summer,” said Nichols. “We see the Camp in the Community kits as a chance for the children and youth to have something new to do, and the materials with which to do it. They are encouraged to use their minds in ways that may be new to many of them.”

Robins said he was encouraged to give Camp in the Community another try in Hancock County by Nichols, who said the at-home version would be an opportunity to promote the ministry for future summers. It worked, as new children are constantly being added to the fold.

“God took COVID and made it into something good,” said Robins. “I feel we arrived at the exact perfect moment. I get the greatest joy from Camp in the Community because we’re giving children something they otherwise would not have.”

Other communities in Holston have experienced increases in registrations this summer, including 125 campers at Elk Garden School Community Ministry in Rosedale, Virginia, and 75 for the Giles County Missional Hub in Virginia.

Winston said the number of partnering churches and groups have also risen from 25 in 2019 to 46 this year.

“There are just lots of ways to build relationships in what feels like a non-summer,” Winston said. “You just never know what God is up to.” 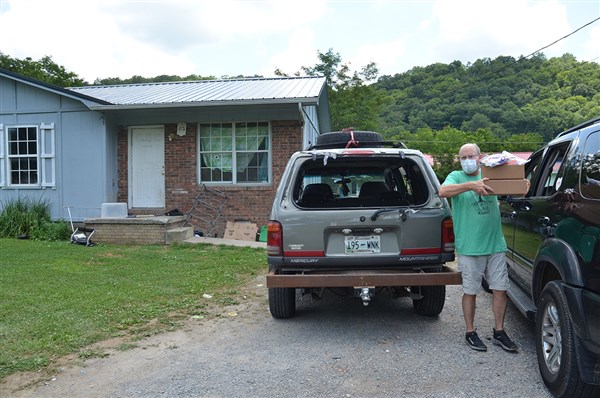 Want to help? Visit these websites for giving details: Did you like this story? Sign up for a free weekly subscription to The Call.
Camp and Retreat Ministry