Clinch Mountain District in the Holston Annual Conference is composed of

in Tennessee and Virginia.

CMD Church Askings Spreadsheet form (for filing out on computer)

CMD 2021 Askings worksheet form (for printing and filling out)

She quickly got a COVID-19 test and quarantined herself. While she waited for the test results, she came up with a new idea for online worship at Madam Russell United Methodist Church.

The idea led to a video series created by Bryant and her lay leader: “Where in the Conference is Pastor Lisa?” The pastor says the series invigorated the congregation for the last few weeks of online worship, until Madam Russell could return to its first scheduled indoor, in-person worship on Oct. 4.

“It invigorated me, too, because it was kind of like, blah. The same thing over and over,” Bryant said of the six months her church depended primarily on online worship videotaped from her family living room. In March, the COVID-19 pandemic caused Madam Russell and churches in Holston Conference to be closed in order to prevent virus spread. 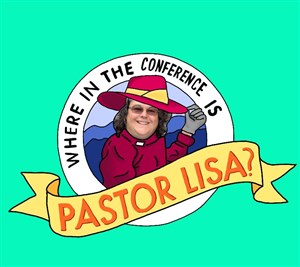 The name for the video series was borrowed from the title of a children’s TV game show and computer game, “Where in the World is Carmen Sandiego?”

Bryant said she first thought of going to a special location to do worship while she waited for her test results and anticipated being sick indoors for a long time.

The first outdoor recording at a new location was so enjoyable, she and her video-producing lay leader, Lauren Griffin, decided to make it into a series.

For six weeks, Bryant took smart-phone videos of herself as she led parts of the worship service in different places around Holston Conference. Griffin edited and combined the pastor’s video clips along with other segments to create the complete Sunday worship video for sharing on Facebook and YouTube.

The Sunday worship videos showed undisclosed scenes and backdrops during Bryant's sermon and prayers, with some clues mentioned. Worshippers were invited to guess the location between Sunday and Tuesday, with new face masks offered as prizes for correct answers.

On Tuesday evenings at 7 p.m., the “reveal video” was posted on social media with more information about the secret location of the previous Sunday’s worship service.

Over the six-week series, Bryant recorded her sermons at
(Story continues after video.)


“We are fortunate to live in the Holston Conference where there is a long and rich history of Methodism,” Bryant said, when explaining the series to her congregation. “Not only that, the United Methodist church is a connectional church. That means that we, as the local church, are connected to all kinds of ministries in our conference, our country, and around the world.”

The "Where in the World" series showcased ministries and historic locations from Johnson City, Tennessee, to Rosedale, Virginia, teaching and inspiring along the way.

For instance, the series revealed that “Madam Russell," the church's namesake, was buried in Aspenvale Cemetery in Seven Mile Ford, Virginia. Elizabeth Henry Campbell Russell, sister of Patrick Henry, is credited for helping to bring Methodism to Southwest Virginia.

Bryant said she learned a lot from the series, too.

While videotaping at the East Tennessee State University, Bryant was surprised to learn students from nearby Milligan College and Northeast State Community College are also included among Wesley Foundation’s participants. Bryant said she informed her son, John, a freshman who was missing community interaction during his online studies at Northeast State.

To the people who successfully guessed the locations, face masks with the message,  “Love one another, John 13:34,” were awarded.

Online worship views increased from 65-125 before the video series was created to 350-450 during the series, Bryant said. Prior to the pandemic, Madam Russell’s average worship attendance was 35.

When the pastor's coronavirus test result was revealed in late August, Bryant learned she had not contracted COVID-19 after all. Shortly after, Lauren Griffin became ill and had to be tested for coronavirus. Griffin also received good news and was able to finish out the video series with relief.

The tests were negative but the results were positive.