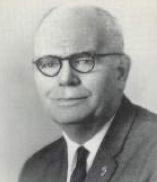 Denman Evangelism Award nominations are due by

Harry Denman was once described by a bishop as the kind of man who could carry the flag at the head of the parade and at the same time beat the drum, setting the cadence for the march. His leadership in evangelism was unique as was his personal life and witness. He was one who went up to persons and always held out his hand, saying, "Where do you preach?" His friendship encircled the world, and he was at home in a variety of settings.

Harry Denman was a layman who had the gift of making people want to listen whether he was speaking with one person or to a multitude. He was a person who never accepted "no" as final. He sought to try that which others thought could not be done, and he succeeded.

Love for the Lord and his fellow human beings was the keynote of his life. He stood for many things that are today coming to pass, but were not popular causes in his own day: the equality of persons regardless of sex, nationality, or race; simplicity of lifestyle, disregard of false values of materialism; and a search for the true values of life taught by Jesus in the Sermon on the Mount.

Harry Denman was truly a "fisher of all persons." He sought to lead the Board of Evangelism into wide presentations of the Gospel to reach people. His personal dedication forced him to follow Christ totally, and he sought to lead others to have what he had: total commitment to a life of faith. He told it like it was as best as he understood it. He did not hesitate to give answers to the tough questions of personal faith, nor did he fail to admit his own personal weakness and frequently asked another person to "pray for me."

To meet Harry Denman was to feel the force of his personality and to be challenged by it. The impact of his spiritual and physical presence is not easily forgotten. He moved tirelessly, confidently, dedicated to one objective: to witness for the Lord, Jesus Christ. When he was part of a group, whether with colleagues or strangers, businessmen or politicians, the conversation was shifted by Harry to the Bible, prayer, and the Risen Lord whom he sought continually to serve. He commanded attention by his dedication and singleness of purpose.

For these reasons, each year Holston Conference seeks to honor one clergy person, one lay person, and one youth whose lives exemplify the spirit and dedication of Harry Denman with the Denman Evangelism Award. If you know persons who reflect the singleness of purpose in reaching persons for Jesus Christ that was exemplified by Harry Denman, please submit a nomination for those persons: clergy, laity, youth.

Denman Evangelism Award nominations are due by May 1st each year for persons to be recognized in the following Holston Annual Conference session. These awards are sponsored each year by the Foundation for Evangelism and the Witness Ministry Team.