Jubilee Project was formed 1n 1991 by Global Ministries missionaries Steve and Diantha Hodges.  The Hodges moved to Tennessee after serving in Korea and North Carolina.  Programs under their leadership included economic 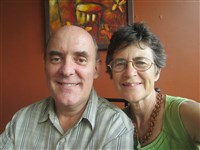 Steve and Diantha left Jubilee in 2010 to participate in Holston Conference ministries in South Sudan.  During the transition time, the Board of Directors committed to continuing the ministries of Jubilee Project.

Jubilee Project purchased the former Flat Gap Elementary School from the Hancock County School Board in November, 2002.  The building was purchased with the goal of economic development including the Clinch-Powell Community Kitchen and working with area farmers to grow and preserve local products.  The site has housed teams of the Mission Team project for several years, and has a commercial kitchen, a large dining room, three sleeping rooms, seven bathrooms with showers, and the gym area used for recreation and storage.

Jubilee has been a partner with Church and Community Ministry through Global Ministries since 2001.  Randy Hildebrant worked with youth, work teams, and disaster response from 2001-2010. Rev. Linda Stransky served as Executive Director as a CCW from 2015-July 2019.  Lisa Nichols is currently serving as CCW/Executive Director, beginning her service in 2019.