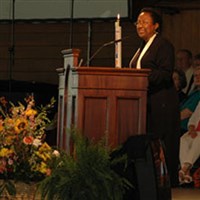 The Mountain View District is home to 118 churches (73 Charges) which are served by 76 pastors. These churches are located in Claiborne, Cocke, Grainger, Greene, Hamblen, Hancock, Hawkins, Jefferson and Sevier Counties.

The District Office is located at 112 East 1st North Street in Morristown, Tennessee. Office hours are 8:30-5:00 Monday-Thursday and 8:30-noon Friday.

MORRISTOWN, Tenn. (Sept. 27, 2018) -- People who participated in the Mountain View District’s discussion about the future of the denomination expressed frustration that upcoming decisions could change the church they know and love.

About 230 people gathered Sept. 23 at First United Methodist Church in Morristown for the fourth in a series of discussions planned by the Holston Conference delegation. The goal is to inform and prepare church members for a special session of General Conference in February 2019, when 864 elected delegates from all over the world will consider three plans designed to keep The United Methodist Church together despite deep disagreements over human sexuality.

More than 25 people took to the microphone during a question-and-answer session with three delegates at the Morristown meeting. Many of the speakers shared emotional statements rather than questions, accented with applause from the audience.

“I believe the ‘way forward’ is written very clearly in the Bible, and the word ‘no’ is involved,” one man declared.

The Rev. Randy Frye, the Rev. Dennie Humphreys, and John Eldridge represented Holston’s 16-member delegation, scheduled to attend General Conference on Feb. 23-26 in St. Louis, Missouri. Delegates will work together to consider the One Church Plan, the Traditional Plan, and the Connectional Conference Plan as created by the Commission on a Way Forward. (Read more about the plans.)

Many of the speakers in Morristown indicated they believe the Bible will be disobeyed if Book of Discipline language is changed to be more accepting of homosexuality.

Others expressed concern the delegation will “vote their conscience” rather than vote as directed by their constituents.

Reiterating a point made at previous discussions, Frye and Humphreys emphasized that the purpose of General Conference 2019 is not to debate scripture but to find a way to strengthen the church’s unity. “We’re trying to hold something together,” Humphreys said.

“Why is it so important that we stay together?” one man asked. He likened The United Methodist Church to a traffic light with red for stop, green for go, and yellow for caution. “We’re sort of stuck on caution,” he said.

Another speaker explained that he wants The United Methodist Church to retain its connectional system. “I’m going to feel disconnected if certain things happen at General Conference,” he said.

One woman said she was concerned that if “progressives and young people are pushed away” by adoption of the Traditional Plan, “the church will lose its ability to do the wonderful things we do through UMCOR.”

Responding to a question about keeping up with the outcome of General Conference, Frye advised the audience to follow the livestream and reports provided by United Methodist Communications at UMC.org. Coverage will also be provided through Holston Conference communications at Holston.org and social media.

Lasting more than two hours, the gathering began with a 14-minute video explaining the three plans and the history leading to the denomination’s current impasse.

The Morristown meeting ended with a pastor’s suggestion that the audience gather around the delegates and lift them up in prayer.

The next discussion is scheduled for Holston’s “northern region” at 3 p.m., Oct. 7, at Colonial Heights United Methodist Church in Kingsport, Tennessee. The delegate discussions will continue through Nov. 12. See schedule.