Kendall Heath does not like “traditional” chili. So her mother, Staycie, took notice when her 15-year-old daughter came home talking about a white chicken chili that her friend’s mom made.

Staycie found a recipe on a site called “Plain Chicken” that was such a hit in her family, she decided to enter the dish in a chili cook-off at her church.

“Chili cook-offs are great fundraisers because other people do the cooking for you,” says Tina. Sixteen pots of chili were entered in the contest and 75 people attended. They voted for the best chili with their dollars. Staycie’s chili racked up $102.

“It’s very easy, and I’m far from a great cook,” says Staycie. “You could have this and regular chili in the same week and not feel like you’ve had the same thing.”

The author, Stephanie Parker, suggests serving it with cornbread. Staycie says she served it with corn chips.

The recipe was so good that the final decadent ingredient, shredded cheddar, didn’t seem necessary, she said. 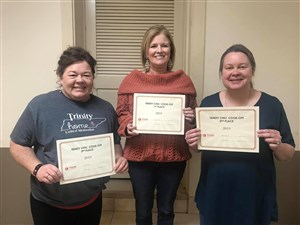