On Friday night, I delivered lasagna, salad, and bread to a group of people who had just lost another friend to addiction.

I have been thinking about a new project that we are calling “Pop-up Dinner Parties.” We are intentional about inviting young people to our monthly dinner party ministry at Norwood United Methodist Church, but I know many of them are never going to come.

So my husband proposed the idea of pop-up dinners. The idea is to cook and deliver a homemade meal for people in a place where they are comfortable and with friends. It might be in an apartment or bar or park, but the meal will be free and offered as an expression of God’s love. The only thing I ask is to be allowed to hand out a few invitations to our monthly dinner party at Norwood church.

I got fired up about that idea and told my two sons to spread the word among their vast network of friends. I said I would love to deliver a taco bar for a Super Bowl party or maybe a casserole for a birthday party.

Last Monday, a 30-year-old man died of a heroin overdose. He grew up with my oldest son Spence, and he was a co-worker with my youngest son Lowry in a restaurant. They worked together as waiters the night before he died. “I’m so confused,” Lowry said. “He seemed fine.”

This isn’t the first time this huge peer group has lost someone to addiction. Three weeks ago, a young woman who used to couch-surf in my son’s apartment died of an opioid overdose. There have been others before, but it’s happening often now. They’re all feeling pretty raw.

“Do you want to make a casserole for us, Mom?” Spence asked a few days ago. “We need comfort food.”

He explained that his friends were gathering for a memorial bonfire on the night before the funeral for the young man they grew up with.

Of course, I said.

So I found a lasagna recipe in “NYT Cooking” that seemed luxurious, rich and classic. I resisted the temptation to take shortcuts or to cut calories. I bought sweet Italian sausage. I crushed tomatoes in my hands, and I poured heavy cream into the mixture of mozzarella, ricotta and parmesan. I took my time as I layered the sauce, noodles and cheese, praying over the people who would eat it, praying for the family and friends who are left behind.

When I drove to the house where the bonfire was to be held, I did some more praying. I prayed that the food would be OK, because I’m always afraid that I will mess it up.

The next morning, my son Spence called to tell me that the food was amazing. He made me feel on top of the world.

And then we talked about the sports jacket he would wear to the funeral. 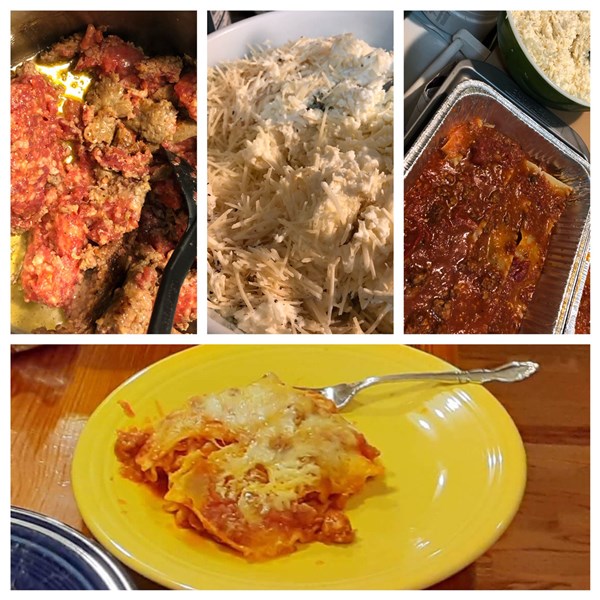