Chocolate Gravy: Camp memories are made of this

Chocolate Gravy: Camp memories are made of this

The first time I ever heard of chocolate gravy, I was well into my 50s. “That’s a thing?” I asked. “It’s a Southern thing?”

How could I have missed it?

Yet miss it I did. I was visiting Camp Lookout when introduced to the notion of ladling warm chocolate sauce over split biscuits for breakfast. (Even though it looks like dessert.)

Chocolate gravy over biscuits is a thing at Camp Lookout in Rising Fawn, Georgia. Director Don Washburn made the recipe a regular attraction several years ago after attending a training that suggested establishing a “signature item” on the camp menu.

Don remembered having chocolate gravy at his grandparents’ house in Alabama as well as a few other delicious encounters. For kids who come to Camp Lookout, a chocolate-gravy breakfast is almost too good to be true. You can see it on their faces as they line up behind the ladle.

But is chocolate gravy really Southern? Paula Deen has been seen stirring up her own recipe, and it’s easy to find Southerners of various regions claiming it belongs to their home state. The Oxford Encyclopedia of Food and Drink in America suggests that Mexican-style breakfast chocolate could have made its way to Appalachia through trading between Spanish Louisiana and the Tennessee Valley.

In any case, what’s sad is that a new generation of campers won’t get to have their minds blown this summer when they see those vats of liquid-y rich velvet for the first time. To keep people safe from coronavirus, the 2020 summer session at Holston Conference’s five United Methodist camps has been canceled.

But wait, wait! You can try this at home!

As the leaders of Holston Conference camps are finding creative new ways to share camp with people at home, Don and his grandson Gus recently made this instructional, gravy-making video for kids of all ages.


Camp Lookout has the recipe on its website, too. Enjoy! 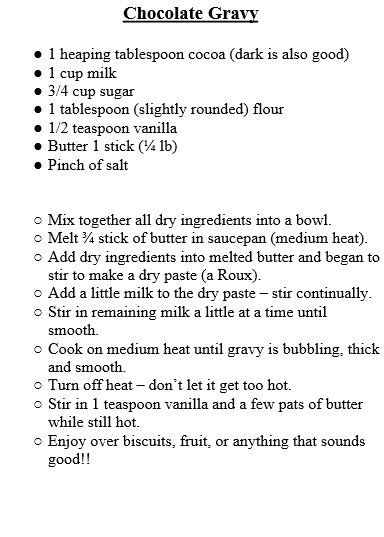