Welcome to the Smoky Mountain District!

Our district is one of 9 districts in the Holston Conference and includes 72 churches, 60 charges, one Mission Congregation and one preaching station. Based in Tennessee, the district includes all United Methodist churches in Blount, Sevier, Loudon County; South Knox County; and one in Roane County. 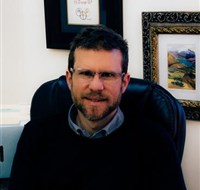 Pastor Matt Hall: 'I found freedom in calling myself an addict'

In 2017, Hall walked 2,200 miles as the Appalachian Trail chaplain from Holston Conference. From June to November, he hiked from Maine to Georgia, representing his church and sharing the love of Christ along the way.

“A big part of wanting to do the AT was gratitude for being able to walk,” explains Hall.

“I found freedom in calling myself an addict,” he says. “One of the reasons why I’m in ministry is because I want to be beside people in the bad times of life, because people were there for me.”

From age 15 to 23, Hall was a user of drugs and alcohol, including opioids. His addiction got him discharged from the army and later put his life and mobility at risk, after an early-morning truck accident damaged his spine.

“It was humbling being 21 years old and having your mother bathe you,” said Hall. After the wreck, he woke up in a hospital with a doctor drilling bolts into his head for the halo and neck brace he would wear for three months.

As the 872 congregations of Holston Conference prepare to devote their annual missions offering to fight opioid addiction, Hall is one of many church recovery workers who know firsthand how ingrained and widespread the disease is.

“It was normal where I was from and for the group of people I was with,” says Hall, a native of Hillsville, Virginia. His addiction started with getting drunk with other high-school athletes after football and soccer games. When he took a job in a fast-food restaurant, Hall used cocaine to sober up for work after a night of drinking.

“I never had a drug of choice. The choice was always more,” the pastor says now. “I used drugs to change the way I felt.”

Later, when he got a job at a grocery store, he needed a beer and pain pills to get out of bed. He smoked pot to get ready for the day, then finished the day with “more beer, drugs or whatever else was around.”

He always kept $20 worth of methamphetamine in his wallet “in case I got drunk and needed to drive ... It’s crazy to think all this made sense at one point.”

Before his accident, the painkillers (opioids) were just a way to get high, Hall admits. After depending on prescribed opioids throughout his injury comeback, his growing hunger eventually led him to buy $100 worth of opioids every day on the street. He sold meth to support his habit.

In April 2013, everything changed. Hall was arrested and indicted for conspiracy to distribute methamphetamine. He detoxed during his three weeks in jail. He was released on the stipulation that he receive treatment for his addiction. His first 12-step fellowship meeting (Alcoholics Anonymous) happened in May 2013.

This past April at the Celebrate Recovery service where he preaches on Wednesday nights, Hall celebrated six years of being clean. He’s amazed how the United Methodist connection helped change his life soon after his arrest.

“I wanted nothing to do with organized religion when I was in treatment,” he says. “I had a resentment against God.”

One day while he was jogging through Hillsville, Hall ran past Out of the Box United Methodist Church, where the Rev. Ronnie Collins is senior pastor. He remembered when Collins was youth pastor at First United Methodist Church in Hillsville. When Hall was 13-15 years old, he had accompanied Collins' youth group to Holston's Resurrection in Gatlinburg.

Hall reconnected with Collins and quickly found himself involved on a launch team for a recovery ministry at Out of the Box. In fall 2013, he was baptized. “Until that point I had never heard anyone talk about baptism. I thought it was a Catholic thing,” he said.

In March 2014, he traveled with the launch team to Holston’s “Evangelism Conference,” featuring the Rev. Jorge Acevedo as speaker, at Cokesbury United Methodist Church in Knoxville, Tennessee.

During that evangelism conference, Hall heard his call to ministry. He realized God wanted him to work full time for him.

“Life just continued to get better” after that. Hall participated in Lay Servant Ministries training, Leadership Holston, Defining Moments, and Candidacy Summit. He completed Local Pastors School and was licensed as a pastor before he set off on the Appalachian Trail.

“I love the connectional church and how this all comes together,” says Hall. While participating in Defining Moments in 2015, Hall visited and worshipped at First United Methodist Church in Maryville, where he was later appointed as a local pastor in July 2018. (Defining Moments is a ministry-discerning event for young adults, now known as Engage.)

“This place has more members than my hometown has residents,” he says of the classic stone church. “The first time I came to this church I had to ask the probation officer if I could leave the state.”

Maryville is more than 200 miles away from Hillsville, where his mother and younger brother still live. He’s in a different world than where he was six years ago. He’s responsible for reading liturgy or preaching on Sunday mornings and for leading a Wednesday-night recovery congregation of about 175. He’s working on his undergraduate degree.

Yet some things never change. Hall continues to work on his own recovery, attending 12-step fellowship groups. He continues to lose friends who overdose on opioids. The most recent was a friend who had just celebrated two years of being clean in April. His friend’s wife called Hall on the night it happened.

“I’ve never been at the scene of the incident before,” Hall says. “I was able to be there for someone in their time of need. I was able to walk with a family through the grieving process. Through so much of my addiction, I was absent. Now I can be present.”

The pastor says he loves seeing new faces during the worship and support groups at his church’s Celebrate Recovery. He wonders why some of them don’t come back.

“People I’ve known all through my recovery have lost the battle with addiction,” he says. He hopes the ongoing Holston Annual Conference mission offering will make a difference.

By June 11, Holston churches hope to raise more than $100,000, which will then be distributed in grants for new and existing ministries. In a 2017 survey, church members in each of Holston’s nine districts cited opioid addiction as a crisis in their communities.

"I used to say the opposite of addiction was abstinence. Now I think it is community," Hall said.

“Every church is equipped to help in some way. I’ve never been anywhere where addiction isn’t a problem.”