September 09, 2021 - by:
Every spring, churches throughout Holston Conference collect food, school and health supplies to help missions in Liberia and Zimbabwe. This June, the Rev. Michael Sluder announced that 5,083 “Hands-on Mission Project” kits, valued at $123,823, had been shipped to Africa after another dedicated effort by Holston church members.

Earlier this month, Sluder, who is director of connectional ministries, learned the supplies had arrived in Monrovia, Liberia. The good news came from missionary Helen Roberts-Evans.

“I’m attaching a letter from the Abraham Wheh United Methodist Church in Paynesville, the city next to Monrovia,” Roberts-Evans wrote to Sluder. “This church is located in a market area that is very congested.”

She explained that the pastor, George Gboyee, has a children’s ministry. He asked for supplies from the containers arriving from Holston Conference to help the children.

“He sent me the attached letter and printed out the attached photos of the children and staff. Pastor Gboyee also gave me the list of handwritten names of each child who received a backpack,” she wrote.

Roberts-Evans continued: “On this past Sunday, I spoke to the congregation and after service, the Pastor Gboyee walked with me around the community. At one house, a little boy stood in the doorway with his backpack on his back and a big smile.”

The letter forwarded by Roberts-Evans was authored by Trokon Compaque, church secretary of Abraham Wheh Memorial UMC. (See below.) He expresses gratitude for the "gifts of book bags ... reading and writing exercise materials, buckets of hand sanitizers, disinfectants and buckets of variety of food items which volunteer teachers and support staff and kids of the Tutorial programs cheerfully received."

The letter noted that the backpacks "with many colors, patterns" provided the children with a "sense of style" that connected them with children of privilege.

"In recognition of your services," the letter concluded, "God is going to continually bless those who supported the process, including you, with your charitable heart." 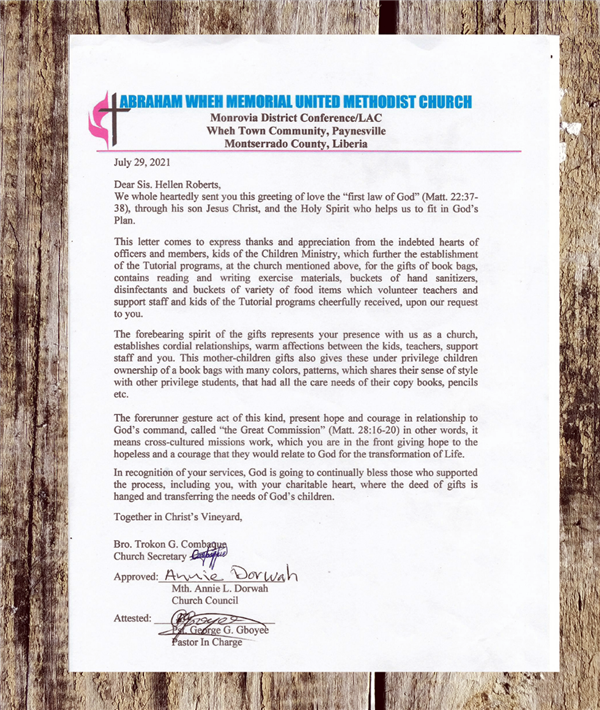